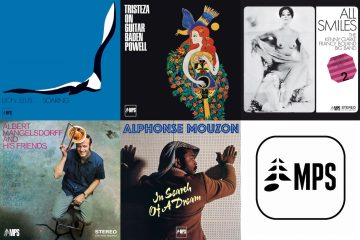 The MPS Summit in May

While Alphonse Mouzon is uniting the Jazzrock cream of the cream on „In Search Of A Dream“ Kenny Clarke and Francy Boland with their “All Smiles” and Don Ellis with his “Soaring” show us the state of the art when it comes to Big Band sound. Joachim-Ernst Behrendt met Baden Powell in Brazil only after the latter was rather difficult to find, the result was “Tristeza On Guitar” the first of many productions that these two made happening. And last but not least Albert Mangelsdorff “… And His Friends” deliver a highlight consisting of duo recordings that have no equal.

Caught on top of their game, this is how you need to describe the Don Ellis Big Band on “Soaring”. Bandleader and Band really gave it their all on this record. 22 musicians consisting amongst others of a dozen artistsin the wind blower section, three percussionists, and a string quartet who bring Don Ellis's sound ideas to life. Milcho Leviev from Bulgaria on the piano is a key player when it comes to taking care of the complex time patterns that Don Ellis wants to create. This is an album that will truly keep the listener soaring to higher musical grounds.

Baden Powell - Tristeza on Guitar
This recording is somehow pure coincidence. Despite intensive efforts by Joachim-Ernst Berendt to find Baden Powell and to convince him of recording for MPS Berendt could only find the guitar player by chance in a random bar. “Tristeza on Guitar” is the start of a nine yearlong spanning collaboration with MPS that brought us five more albums. Despite the title, this album is not at all sad but stretches from Carneval to intimate singing.

The Kenny Clarke Francy Boland Big Band - All Smiles
While this is another Bing Band album, this is not a typical Big Band album. “All Smiles” is truly capturing the Clarke Boland Big Band on the height of creativity. With a band that is building connections across continents between the U.S. and Europe this formation is really packed with energy and full of creativity and this is really transmitted on to the record. With Dave Pike booked for a solo this is really not your typical big band sound.

Albert Mangelsdorff - And His Friends
This record is strictly containing duo recordings of very different types but definitely “with tongue in cheek, or better mouthpiece” as the liner notes quote.
“Albert Mangelsdorff and His Friends” does not only draw a very intimate portrait of one of the most important figures in German jazz but also shows his deep friendship with other very different artists and characters. This is also a wonderful walk through the international jazz history and a blueprint of the euphoric mood of the late 1960’s.

Alphonse Mouzon - In Search Of A Dream

On December 25th of last year Alphonse Mouzon sadly passed away after battling with a rare form of cancer. One of the most famous Mouzon quotes is: “Because my mind is open, I don’t always want to be identified as just a jazz drummer.” Hans Hielscher added that nowadays Mouzon might be known to just as many rock fans as he is to the jazz community.
Mouzon celebrated his 29th birthday in 1977 while recording in the studio. You can even hear the party going on in the background and the crowd singing “Happy Birthday”. With Miroslav Vitous on bass, Bob Malik on sax, Stu Goldberg on keyboard, Joachim Kühn hitting the keys on keyboard and piano and Philip Cathrine on guitar Mouzon truly got the jazz rock elite together for this recording.

Albert Mangelsdorff And His Friends

Alphonse Mouzon - In Search Of A Dream