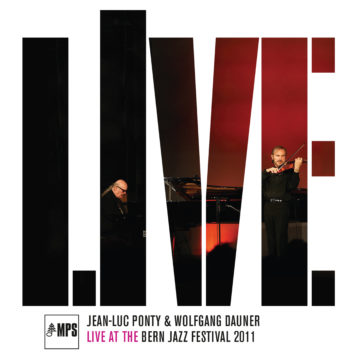 It’s a pleasure to announce the release of a live recording by Jean Luc Ponty & Wolfgang Dauner. Live At The Bern Jazz Festival 2011 will be out on Feburary 25th and available for the first time on LP, CD and digitally.

Recorded live in March 2011 at the Bern Jazz Festival, this record showcases two of Europe’s greatest jazz artists and innovators perform as a duo. Legendary drummer Kenny Clarke compared Jean-Luc Ponty to Dizzy Gillespie. Fellow violinist Stuff Smith marveled, “He plays violin like Coltrane plays saxophone.” Born in 1942, the French violinist transported jazz violin playing into the world of modern jazz.
Pianist Wolfgang Dauner, born in 1935, is a German jazz institution. His various experiments fusing jazz, classical, rock and avant-garde elements catapulted him to the front of contemporary European jazz. He ran the gamut of jazz styles and trends in a career that spanned over six decades.
Despite the greatest admiration for each other and many performances throughout the late 60s, Ponty and Dauner lost contact after Ponty moved to California in 1973 and both embarked on new musical adventures. It took over two decades until both reconnected after the violinist was invited as a performer for a special concert celebrating Dauner’s 60th birthday as Ponty explains: “He suggested that we play a few tunes together as an acoustic duet and I loved it so much that I decided to do more concerts with this format. Years later we heard the live recording of our live performance at the Bern Jazz Festival 2011 and we both agreed that we should release it as a live album.
I was extremely saddened when Wolfgang passed away in January 2020 and the release of this live album became even more important to me as it adds to the legacy that Wolfgang is leaving to the musical world. It also feels very special for me to work again with the MPS label, for which Wolfgang and I have produced several recordings in the 60s.  We made a selection of his compositions and mine that worked best as an acoustic duo. I always loved his lyrical pieces with rich harmonies, the poetic and spacy moods of his music with which I felt a strong affinity. “

2022 Reissue of Alphonse Mouzon’s “By All Means”

The Best Of The MPS Years – Series