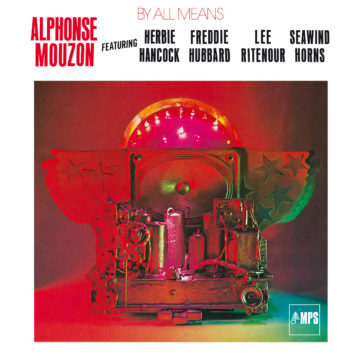 2022 Reissue of Alphonse Mouzon’s “By All Means”

A new reissue of Alphonse Mouzon’s By All Means will be released on February 25th 2022 on CD, Vinyl and digital. The audio is remasterd from the original master tapes. This classic from 1980 is featuring an all star band with Herbie Hancock, Lee Ritenour, The Seawind Horns, Paul Jackson Jr & Scott Edwards as well as a solo by Freddie Hubbard.

At the time of his death in 2016 at the age of 68, drummer, composer and multi-instrumentalist Alphonse Mouzon had for decades been a major force within the jazz, fusion, R&B and pop arenas. The early eighties was a time when Mouzon toyed with disco and channelled funk. His musical amalgam was a far cry from the Saturday Night Fever brand – he brought more funk, more soul, more spontaneous creativity into the mix.

For By All Means, Mouzon brought together musicians who were masters in virtually any musical style. The rhythm section belonged to the who’s who of the LA studio scene. Electric bassist Scott Edwards had worked with such stars as Stevie Wonder, Smokey Robinson & Aretha Franklin. 21-year-old guitarist Paul Jackson Jr. was just beginning his stellar career, had recorded with Aretha Franklin and within a few years he would participate in Michael Jackson’s Thriller and Bad and would go on to work with the likes of Elton John, George Duke, Al Jarreau, and Marcus Miller. Lee Ritenour began playing and recording with Mouzon in 1974. At the age of 17, Ritenour first worked with Tony Bennett. He was also brought in to put a little more rock in the rock ’n roll of a couple of takes on Pink Floyd’s seminal “The Wall”. Over the years he has recorded with many of the giants of pop, rock, and jazz, and his own recordings have had a slew of Grammy nominations. Herbie Hancock stands beside Mouzon as the other major presence on the recording. Like Mouzon, at the beginning of the eighties he delved into disco, adding danceable grooves to the mix. During this period Mouzon was Herbie’s drummer on four of Hancock’s albums, so it seems appropriate that these two like-minded musicians came together for this recording. The Seawind Horns provide the last needed ingredient in this tasty musical concoction. Guesting on the title track, trumpet great Freddie Hubbard’s contributes a flashy solo. The album is a classic of the period, blending funk, disco, and improvisational creativity. By All Means, get out on your private dance floor and get up with it.

By All Means
Album Spotlight