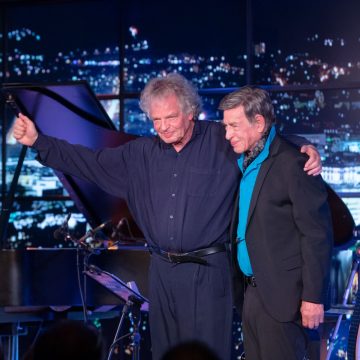 Rolf and Joachim Kühn have been awarded the German Jazz Trophy 2018 at this year's Jazzopen Stuttgart.

From the jury statement: "On their instruments Rolf and Joachim Kühn are excellent masters, whose virtuosity never becomes an end in itself, but always subordinates itself to a convincing musical statement. It is no coincidence that both instrumentalists also emerged as composers, either of them with his own substantial content."

The Kühn brothers have been MPS recording artists since their joint label debut "Transfiguration" (released in 1967) with numerous individual recordings throughout the 1960's and 70's, with Rolf Kühn continuing since the label's reactivation in 2015. On occasion of MPS's 50th anniversary Rolf and Joachim Kühn will play a duo concert at the MPS Festival in the label's home town Villingen on September 8th.

Celebrating “50 years MPS” – The Anniversary Compilation is out now