For a German jazz musician to find international recognition as a major player has been and remains a rarity. Clarinetist Rolf Kühn belongs to this elite class. And there are ample grounds for this: he is an exceptional artist on his instrument. No one sounds like him on the clarinet; warm, round and masterful, his tone remains unmistakable no matter what style he may be playing at any given moment. His play resonates with a maturity and wisdom gathered from a long and rich life of musical experiences. Kühn continues to be driven by an unbridled curiosity that compels him to continually stray from familiar paths and tried and true formulas. Yet equanimity and a sense of completeness are as intrinsic to his work as the daring and the adventure of risk-taking.

Rolf Kühn has absorbed the entire history of jazz. What began with a youthful fascination for swing eventually led him into the freest areas of improvisation, while maintaining an unerring sense of form and quality. Born in Cologne, Kühn grew up in communist-controlled East Germany in the city of Leipzig directly after the second world war. By his late teens, Kühn was already a sought-after soloist by the best German big bands. And he accomplished what no other German was able to do at that time: make the leap to the USA and gain recognition in the country where jazz was born. After being voted Best European Clarinetist, Down Beat magazine named him "New Star on Clarinet" in 1957. Kühn played in the orchestras of Benny Goodman and Tommy Dorsey and even led Goodman’s band in the legendary leader’s absence. Inspired by clarinetist Buddy DeFranco, Kühn found his own, modern language on the instrument.

Back in West Germany by the beginning of the sixties, Kühn first took over the direction of the NDR television orchestra, and later worked as musical director for such major venues as the Theater des Westens in Berlin. He played in a wide variety of prominent settings, from chamber music groups to the German All Stars on through to collaborations with big bands and symphonic orchestras. Kühn’s play ranges through the modern jazz tradition, fusion, and free jazz, yet he has always remained unmistakable musically, no matter what the style.

Kühn continues to explore contemporary horizons and dares to venture into new musical territory. In this way, he is like his younger brother, pianist Joachim Kühn. The two had already begun to play together when the 15-year older Rolf would visit his brother behind the Iron Curtain at Joachim’s home in Leipzig. After Joachim made his escape to the West, the Kühn brothers gave a triumphant concert at the Berlin Jazz Days, followed by a performance at the Newport Jazz Festival. Two weeks later they were in New York City recording on the legendary Impulse! label with their festival quartet, which included Coltrane bassist Jimmy Garrison and drummer Aldo Romano. In 2012 Rolf and Joachim reconnected with Impulse! with their album "Lifeline", featuring bassist John Patitucci and drummer Brian Blade.

The albums Rolf Kühn recorded for the MPS label in the 1970s are now among the milestones of the music, and have become coveted collector’s items. The list of band members on these albums reads like a who's who of the last half-century. The music spans jazz, fusion, and the avant-garde, as Kühn engages with the crème de la crème. Alphonse Mouzon, Philip Catherine and Wolfgang Dauner, Michael and Randy Brecker, Chick Corea, Charlie Mariano and Dave Liebman, as well as such musical freethinkers as Lee Konitz, Albert Mangelsdorff and Ornette Coleman are among the musicians that join Kühn on the MPS sides.

Kühn’s unending desire to deepen and expand his expressive horizons inspires him to constantly search for new musical adventures. Such recent collaborations as the "Rolf Kühn Unit" with guitarist Ronny Graupe, bassist Johannes Fink and drummer Christian Lillinger have developed into long-term projects. In the process of playing and improvising with musicians young enough to be Kühn's children and grandchildren, the ‘old master’ passes on his treasure trove of experience to these younger players. In turn, Kühn is inspired by their fresh ideas. It’s truly a band of jazz generations. For his "Spotlights" album, Rolf Kühn decided to incorporate a concept that runs through the entire recording. Cellist Asja Valčić, vocalist Ed Motta, mandolin virtuoso Hamilton de Holanda, and Albrecht Mayer, oboist for the Berlin Philharmonic, were invited to participate in this studio collaboration. The album "Yellow + Blue" also gave the green light to start up a new group. The line-up may look like a "classic" jazz quartet, but with Frank Chastenier on piano, Lisa Wulff on double bass, and percussionist Tupac Mantilla, Rolf Kühn once again demonstrates his inclination towards unusual, exciting constellations that create shifting sonic images ranging from the gentle to the jarring.

Characterized by a deep affection and intuitive understanding for each other, Rolf Kühn’s collaboration with brother Joachim is a constant that runs through his work. So it is not surprising that the two were jointly awarded for their life’s work with the Jazz-Echo Prize in 2012 and the German Jazz Trophy in 2018. Rolf was also honored with the German Record Critics' Award in 2009 and the B.Z. (Berlin Newspaper) Culture Prize in 2013. For his 85th birthday in 2014, an expanded new edition of author Maxi Sickert’s biography on Kühn, “Clarinet Bird: Rolf Kühn - Ein Leben mit Jazz " was published. In connection with Kühn’s 90th birthday, the premiere of the film documentary "Brüder Kühn. Zwei Musiker spielen sich frei"" by acclaimed German filmmaker Stephan Lamby has its premiere. It will be broadcast on Germany’s 3Sat TV station on Saturday evening, September 21, 2019.

Vitality and wisdom, maturity and brilliance – Rolf Kühn's music is his gift to his continually expanding intergenerational crowd of fans and admirers in the jazz world and beyond. His decades-long presence as a powerful creative force continues with no end in sight. 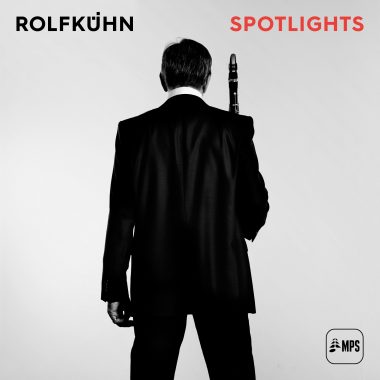