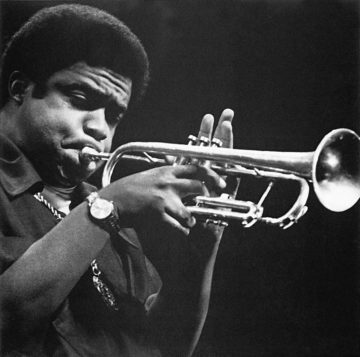 You probably know the MPS classic “The Hub of Hubbard” but did you also know that there is a second Freddie Hubbard record on MPS, a live album called “Rollin’”? “Rollin'” is now available for streaming and download again: https://VA.lnk.to/HubbardRollin

Hubbard had become one of the greatest trumpet players jazz ever knew, able to swing easily and identifiably in bop, modal and free environs and successfully wed elements of soul, R&B and popular music into his work. Freddie Hubbard contributed significantly to jazz during a half century of performance as a solo artist, a side man and even as a session player. Hubbard also recorded countless classics of his own during productive stays at Blue Note (1960-65), Atlantic (1966-70), CTI (1970-73), Columbia (1974-1980) and of course his “Hubof Hubbard” recording for MPS in 1969.

By the time of Rollin’ (1981), Hubbard wasn’t hitched to any one label, but he recorded and performed more frequently than ever before. He was also free to play pretty much whatever, whenever and wherever he wanted.

Originally recorded live in Germany’s Black Forest at the Villingen Jazz Festival, this one comes almost exactly at the mid-point of Hubbard’s career. It was an awkward period in jazz and a somewhat mystifying time in the trumpeter’s history. After a series of commercially unsuccessful – yet artistically redeeming – fusion albums the trumpeter made for Columbia (although the “straight ahead” VSOP albums Hubbard participated in are often forgotten in this period), there was a mistaken impression that Hubbard was searching to regain some sort of a foothold.

Nothing could be further from the truth. Rollin’ shows no such sign of indecision or uncertainty. This is a leader very much in control, playing with passion and grace and collaborating with what turned out to be one of his best and most well-documented bands. MPS allowed Freddie Hubbard to pretty much roll as he wanted here, with his own band doing his own tunes. By this point, Hubbard had built up a sizeable back catalogue of music he could pick and choose from. Rollin’ offers a bountiful selection of just some of the goodies from Hubbard’s cupboard.

The fiery “One Of Another Kind” was originally heard on a McCoy Tyner album featuring Freddie Hubbard, Together (1978), then on the VSOP album Live Under The Sky (1979). The song was, by this point, a staple of the trumpeter’s performances, and also appeared on many subsequent albums. Hubbard’s powerful delivery here calls one to stand up and take notice. It certainly roused this audience to rapt attention.

“Here’s That Rainy Day” was one of those classic torch songs made famous by Frank Sinatra in the late 1950s and first recorded by Hubbard on his album Straight Life (1970). Here, Hubbard moves over to the flugelhorn, for which he shows a particularly beautiful hand, wreaking the most melodic of moods out of the song’s melancholy maisma.

Hubbard’s spritely “Up Jumped Spring” first appeared on Art Blakey’s Three Blind Mice (1962) and was later revived for Hubbard’s Backlash (1966). The ever-lilting, light-as-air waltz is now something of a standard. Here Freddie floats effortlessly like a butterfly over the warm waves his group generates for him here.

Hubbard debuted “Byrdlike” with a different spelling on Ready For Freddie (1961) and later revived the straight bop number with this spelling on the VSOP album The Quintet (1977). The song is said to be a tribute to fellow trumpeter Donald Byrd, but just one listen seems more accurately to reference Charlie “Bird” Parker. Maybe it’s meant to immortalize both. Hubbard (on flugelhorn) and Klein (on upright bass) engage in a marvelous little pas de deux here, both soloing magnificently. It’s clear that whatever winged thing Hubbard is referencing inspires him to take flight.

“Brigitte,” written for Freddie’s wife and widow, first appeared on Hubbard’s Keep Your Soul Together (1973) and was the highlight of such later albums as The Love Connection (1979) and Ride Like The Wind (1981). Here, the group (less Schnitter) offers a most moving tribute to the trumpeter’s special lady, with the trumpeter providing some of his loveliest declarative statements.