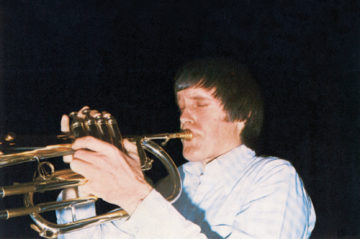 Classical, Avant-garde, East Indian and Balkan metric concepts, big band jazz – Don Ellis brought it all together with his own orchestra; as early as the 1966 Monterey Jazz Festival, Ellis and band were putting the public’s expectations to the test. Over the years Ellis expanded and refined the band’s fantastic expressive abilities by, for instance, the integration of a string quartet into the group, or inviting the Bulgarian pianist Milcho Leviev as special guest. In 1973, trumpeter Ellis and orchestra recorded two albums for MPS. This first album is titled “Soaring”; the scintillating music created by 22 musicians, including a 12-piece horn section, three percussionists, and a string quartet provides a shimmering, translucent texture captured in a Hollywood studio at the zenith of the band’s abilities. “Haiku”, the second one featurs Ellis with a core quintet and varying configurations of a 12-piece string orchestra. “This album is a very different Don Ellis record. Rather than using a big band, the trumpeter is well showcased while backed by a large string section on ten moody originals … much of the music is quite mellow. A definite change of pace”, said Scott Yanow of Allmusic.

In The Mood For Love – MPS Playlist