In Chicago, July 1977, Milt Buckner died, just two months after the recordong of “Alive & Jumping” together with Lionel Hampton and it seems that now he has more fans than when he was alive. Milt Buckner did not belong to the extravagant “Super Stars”, even though his musical performance was enough to rank a place in this category. Long before Jimmy Smith received his accolation, Buckner discovered and popular-ised the organ as jazz instrument during the early 59’s. The history of the ‘locked hands’ style of playing, i.e. parallel played chords which Shearing perfected, stems at least from Buckner’s playing style.

In 1941 Buckner worked as an arranger for Hampton and also as a pianist. This “Alive & Jumping” live recording is the last from Milt Buckner, it is one of the most interesting, probably due to the fact that it includes the 1948 blending of the unforgettable “Hamp’s Boogie Woogie”. Milt Buckner’s creativity and of course his warm-hearted playing therefore makes the LIONEL HAMPTON ALL STARS one of the most dazzling and immortal groups of this time. 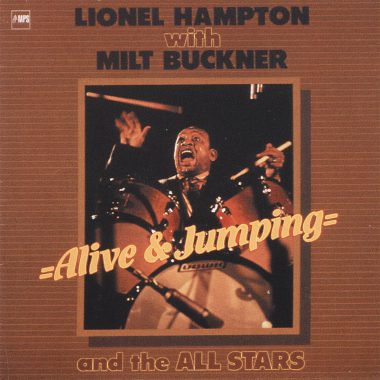