Tenor sax battles have been an indelible part of jazz, as witnessed by the legendary Coleman Hawkins/Lester Young battles, the classic Dexter Gordon/Wardell Gray albums, and the Rollins/Coltrane "Tenor Madness". Add this 1971 skirmish between James Moody and Al Cohn to the list. A mainstay in Gillespie's big band and quintet, Moody worked with many of the music’s greats. His solo on I'm in the Mood for Love is a jazz classic. Cohn is recognized for his part in Woody Herman’s famous Four Brothers tenor sax section, as well as his quintet with fellow tenor great Zoot Sims.

Moody and Cohn grew out of many of the same influences, and the two speak the same language: bop. They are backed by the exceptional rhythm section of legendary pianist Barry Harris, bassist Sam Jones, and drummer Billy Brooks. Harris takes a Monkish intro on East of the Sun, with Moody's aggressive solo style set in congenial contrast to Cohn's more relaxed behind-the-beat play. After Harris’ solo, James and Al trade fours. Moody is featured on his charming ballad Vezzioso; a sense of Strayhorn runs through the piece, as Moody triple-times through the changes, while Harris keeps it slow and lovely. The two tenors are back together having fun on Tad Dameron’s jazz classic Good Bait; Moody takes off, while Cohn keeps it low-down and easy.

J.J. Johnson's blues We Dot is played at a bopping up-tempo; Al takes the first solo followed by James. There’s an extended Harris solo before Moody begins trading choruses with Cohn. With his laid-back, bluesy rendition of The Underdog, Cohn contributes a ballad of his own. On his relaxed-and-swinging Mr. George, Cohn takes the first solo, followed by Moody and Harris. The tenors then take turns trading eights with the drums, with Al taking first dibs. It’s a harmonious clash between like-minded tenor sax giants who are too heavy for words! 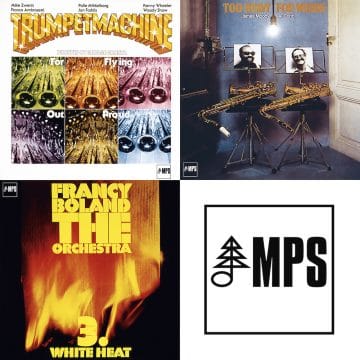 The digital MPS re-issue marathon is nearly finished. This is the forelast digital release bunch. By the end of this year the complete MPS Records catalogue is digital available on all common download services for the first time. The Francy Boland ...

The digital MPS re-issue marathon is nearly finished. This is the forelast digital release bunch. By the end of this year the complete MPS Records catalogue is digital available on all common download services for the first time. The Francy Boland ...