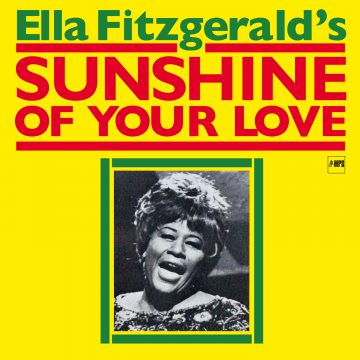 Ella Fitzgerald singing Eric Clapton’s Sunshine of Your Love, or the Beatles’ Hey Jude? Something of a revelation for those who know Fitzgerald as purely a jazz singer. In October 1968 Ella Fitzgerald performed such a set of selected pop songs at the Venetian Room in The Fairmont San Francisco Hotel. Ella’s pristine clarity of earlier years, now tinged with a throaty worldliness, is a perfect foil to her choices from the world of rock and pop. It also adds new depth to such standards as Give Me the Simple Life, Old Devil Moon, and Burt Bachrach’s A House is Not a Home. Recorded “live”, the album is divided into a big band set and Ella with her long-time accompaniment, the Tommy Flanagan trio. Pianist Flanagan is simply one of the all-time greats. After listening to this, how can you not be a fan of Ella’s?

It was recorded by music producer and the founder of Verve, Norman Granz

This is an album for which I recorded Ella Fitzgerald live at the Fairmont Hotel in San Francisco. I edited the usual night-club patter by the artist, audience conversation, and, particularly, applause as sharply as possible. I think in today’s context having an LP cluttered and consumed by extraneous matter is unworkable; people who buy records want the artist to get on with it and go from one number to the next as quickly as possible. Obviously, beginning and ending applause were unavoidable, but at least the action of Ella’s routine wasn’t appreciably retarded. The advantage of recording before a live audience for an artist like Ella is immense because of the emotional Iift she receives from an audience – so I suggest that in this album you have the best of both worlds: optimum result by the artist and as near studio conditions as possible. (The recordings themselves, by the way, technically couldn’t have been better in a studio, and for this I owe the engineer thanks.)

One side of the album is devoted to the permanent trio, led by Tommy Flanagan, that accompanies Ella on her forays throughout the world. Flanagan is not only the best pianist around for accompanying singers, but is in his own right a great soloist, certainly among the top half-dozen jazz pianists. This, I might add, is not only my opinion, but also the judgment of musicians who have worked with him. The rest of the trio consists of Ed Th igpen on drums, who for years was with the Oscar Peterson Trio, and a very promising newcomer from the West Coast, Frank de Ia Rosa, on bass. (He doesn’t, happily, use ar ender bass; what you hear is the pure, unadulterated bass sound.) The trio sides, a melange of songs by Bacharach, Jobim, Ellington and Alec Wilder, among others, obviously give Ella the freest range for improvisation and prove without doubt her deep, deep roots in jazz. The big band charts have Ella accompanied by a band, the nucleus of which is the Ernie Heckscher band, and Heckscher, who is a fixture at the Fairmont Hotel’s Venetian Room is just about the best orchestra of that genre around. The orchestra was augmented by a fabulous Iead trumpet player, Allen Smith, and the rhythm section remained the Tommy Flanagan Trio.
Ella’s choice of tunes shows that she’s been listening to what’s happening today; i. e., Hey Jude, This Girl’s ln Love With You, Sunshine Of Your Love, and so on.
The arrangements of Sunshine Of Your Love, Hey Jude and Alright, Okay, You Win were by Marty Paich; Watch What Happens by Tee Carson; This Girl’s ln Love With You by Frank de Vol; Give Me The Simple Life by Bill Holman.

At this late date, since l’m adamantly against blurbs which disguise themselves as Iiner notes, I see no reason to teil you any more than the above facts and Iet you judge for yourself just how well Ella Fitzgerald sings and, for example, how equally good she is with a Hey Jude on the one hand anda Useless Landscape on the other. Usually one wraps up Iiner notes by saying “This is Ella Fitzgerald at her best”. I can’t do that because l’m too biased, but if it’s worth anything to you, I can tell you that Ella thinks this is one of her best.
March 27, 1969, Norman Granz