Francesco Tristano, a young musician and composer causing a stir on the club scene as well as in classical concert venues is probably a world-first. It may also be the first time that purists from the classical and techno camps actually agree on something – That they don’t know quite what to make of this young musician who refuses to stick to the rules. For Francesco Tristano this kind of reaction is nothing new. Experienced concert audiences and classical music lovers may feel equally baffled when they hear a pianist blend and mix his own composition – just like a DJ – into a piece by baroque composer Girolamo Frescobaldi…

The intrepidness with Francesco Tristano combines eras and styles, occasionally allowing them to collide, may initially create a baffled response. However, Luxembourg-born Tristano has no aspirations as an agitator. Almost everything he does is an expression of an open-minded attitude which refuses to accept borders and constrictions. Tristano knows all about the interpretational conventions that have shaped generations of classical pianists – and he has chosen to ignore them. He does not seek approval as an artist and when his dynamic performance emotively basks in the intrinsic severity of Old music – that’s when he’s truly radical. Tristano, born in 1981, discovered the piano at the age of five. Aged 13, he played his first concert, presenting his own compositions. He later toured both as a soloist and with renowned orchestras, such as the Russian National Orchestra, the Deutsches Symphonie-Orchester Berlin, and the Hanoi Philharmonic Orchestra among others. Tristano founded his chamber ensemble, The New Bach Players which he also conducts. This ensemble consciously breaks with conventions, using a modern grand piano and old, vibratoless bows on contemporary string instruments.

Tristano visited New York’s Juilliard School during five years. The city of New York opened his ears to electronic and club music. to complete Bach legend Rosalyn Tureck’s master class. In 2004, he won the first prize at the International piano competition for contemporary music in Orléans, France. Tristano has released twelve albums, among them recordings of Bach Goldberg Variations and complete keyboard concertos, Luciano Berio complete piano works, and Girolamo Frescobaldi Toccatas. Not for Piano (inFine, 2007), presented his own compositions as well as versions of techno classics at the piano. Idiosynkrasia (inFine, 2010), recorded at Carl Craig’s Planet E-communications in Detroit, was released to critical acclaim in 2010. bachCage, produced by Moritz von Oswald, was released on DGG in 2011. Tristano is a Deutsche Grammophon artist and he just released his third album scandale with Alice Sara Ott on that label. His collaborative tracks and remixes have been released on labels such as Innervisions, CLR, Visionquest, PIAS and Infine.

Since winning the Django D’Or for Young Talent in 2005 Pascal Schumacher has been relentless in assuring his position as an outstanding artist and composer. He consistently achieves recognition in being awarded some of Jazz Music’s most prestigious titles, from the ECHO JAZZ for International Instrumentalist of the year 2012 and in 2013, the JTI Trier Award for inter-regional achievements across the euroregion of Saar-Lor-Lux.

He has been described as a “Goldsmith” in his art, a boundary-pushing musician, a resourceful improviser and an imaginative composer.

Keen to explore the links that exist between many musical genres, it is difficult to pigeon–hole his talent, his taste or his musical influences. One thing is certain: he is a Vibraphone player with a unique aptitude and sensitivity who manages to inject panache and flamboyance into every performance.His flair for improvisation is married to a lucid inventiveness which together creates an original sound as visionary as it is melodic.

As a physical performer, he is skilful, far-reaching and theatrical without being pretentious, making his performances inclusive and interesting to watch. Since he gave birth to his first serious musical project in 1995, his musical partnerships and projects resemble his eclectic nature.

His duo with Jef Neve produces a hybrid that has been described as somewhere between pop-infused contemporary music and classic-infused jazz.

Pascal Schumacher and Francesco Tristano, also recognised as an European Concert Hall Organization Rising Star, perform as a trio with the Lebanese percussionist Bachar Khalifé and share with the audience fascinating insights on the beauty of the journey into the contemporary sound experience.

The Pascal Schumacher Quartet has a potent hook-laden feel that creatively destroys all notions of the polite dinner jazz associations of the past and produces a contemporary sound that is beautiful, melodic and effortlessly articulated. Their 5th studio album, Bang My Can the third release on Enja records, was launched in 2012 to critical acclaim.

In the project In phase with JS Bach Pascal Schumacher offers a decomposition and re-composition of the Brandenburg Concerto No. 3 (BWV 1048) written in 1719. He uses his own starting point, based on his own particular aesthetic, which has been honed through his influences and his style created from a co-existence between European and American contemporary Jazz.

As a composer he writes not only for the duo, trio, quartet and chamber music ensembles, but has also created and produced film, theatre and dance projects. He was involved in a ground- breaking Multi-Media project CTRL variations and a trans-disciplinary theatre project entitled LUXTIME – Jacques Tati revisited.

He is a laureate of no less than four of Europe’s most notable Conservatories from his home town of Luxembourg as well as those in The Hague, Strasbourg and Brussels. He now teaches in the Luxembourg Conservatory classical percussion and jazz vibraphone.

The  glorious soundtrack  written to accompany 1929 silent film  A Woman one longs for  directed by Curtis Bernhardt and starring the incomparable Marlene Dietrich, was premiered as a Live Film-Concert in the Philharmonie Luxembourg in May 2012, conducted by Christian Schumann. It seemed then that the ever enigmatic Ms. Dietrich had  met her match in the unequivocal expertise of Mr Schumacher. Never one to rest on his laurels however, Schumacher has pushed the boundaries once more and the Schumann, Dietrich and Schumacher trio will reunite in November 2014, this time to full Orchestral backing by none other than Luxemburg’s own national Chamber Orchestra (OCL).

2015 is set to begin with a long requested, much hoped for and eagerly anticipated concerto for Vibraphone and Orchestra, commissioned by the Philharmonic Hall and featuring the Orchestre Philharmonique du Luxembourg under the baton of Duncan Ward. The piece, dubbed Windfall is perhaps Pascal Schumacher’s allegory of his own parcours, a personal homage to the wonder of life; a nod to the opportunities and encounters that have come his way, as he has intuitively carved his own space and form on the musical horizon.

With two album releases underway in 2015 will have to work to keep up with his many incarnations. The German label MPS Records/Edel Kultur will release Afrodiziak, a debut for the collaboration between Bachar Khalifé, Pascal Schumacher and Francesco Tristano and Laborie Jazz, France is set to  release Left Tokyo Right, Pascal Schumacher’s first Jazz solo album featuring Magic Malik. 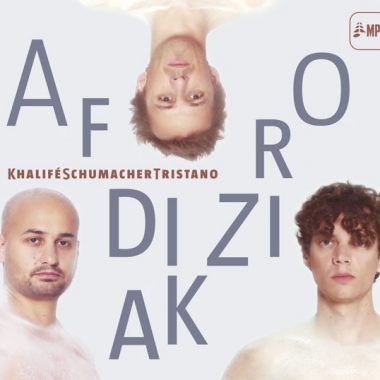