Sax player, singer and composer. On MPS you find his live performance at the Donaueschingen Music Festival from December 1st, 1967-

Live at the Donaueschingen Music Festival
An episodic free jazz classic. Saxophonist Archie Shepp’s sound encompasses traces of Ben Webster, table-jumping, shouting r&b tenor players, and the explorations of the ‘60’s avant-garde, enveloping them into his own unmistakable sound filled with passion, pain, anger, and a dazzling beauty. Accompanied by Roswell Rudd and Grachan Monchur the two trombonists who worked in his greatest groups, as well as Jimmy Garrison, bassist in John Coltrane’s legendary quartet, and drummer Beaver Harris, Shepp and co explore the outer edges, at the same time digging into the fecund ground of swing, bop, and r&b. By the way, when you hear a tailgating Avant-Dixie trombone style, that’s Roswell. Grachan is the mellower of the two. One For Trane is a two-part piece dedicated to the great John Coltrane, who had died earlier that year (1967). The first section opens with Garrison’s inspired deep-throated Spanish-tinged bass solo, then focuses on Shepp’s stentorian playing accompanied by an incendiary trombone-bass-drums background. The second includes trombone solos, especially Rudd, as well as an off-the-wall version of “The Shadow of Your Smile”. For those who are fans of the 60’s avant-garde, a must–have; for those who have steered away from “free jazz”, a good place to take a spin. But fasten your seatbelts – this is a high-speed ride. 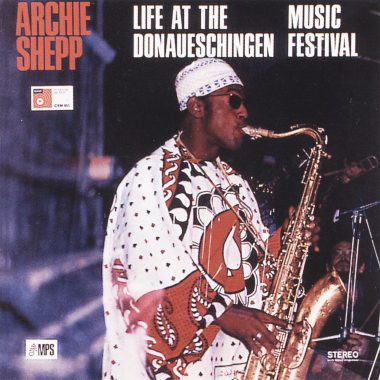