Who is Lyndon Berg, the singer and drummer supposedly on this record called Free Jazz Goes Underground? The only record this band called Free Orbit ever did. Whoever listens very carefully and with a bit of fantasy may be able to recognize the voice: German rock star Udo Lindenberg. It’s not easy to detect, since there is a second vocalist as well, and the typical Udo characteristics are missing: the texts are in English, not German; his typical vocal style is absent. Even so the 1969 LP can be seen as evidence of his upcoming singing career. Lindenberg had only recently arrived in Hamburg; musicians knew him as a capable drummer. Klaus Doldinger needed a drummer who could swing in 4/4 as well as play rock beats for his band Passport, so he grabbed Udo. Newcomer Lindenberg hung out at the basement club, the Jazzhouse, on Brandstwiete Street, cattycorner from the SPIEGEL building complex in Hamburg’s historic quarter. It was here that he ran into trumpeter Fred Christmann and the American saxophonist Frank St. Peter. The three formed the group Free Orbit. For the recording in the Jazzhouse the band came out with nine musicians, including trombonist Peter Herbolzheimer, who in 1988 became the leader of Germany’s National Youth Jazz Orchestra. Lindenberg wrote the music and text for most of the pieces, Frank St. Peter scored all the arrangements. Counter to the title’s proclaiming, Free Jazz Goes Underground, the LP offers up basic rock-jazz. Only on the last piece, Flying Windmill do the horns improvise with a modern slant and Lyndon Berg drums out a solo. 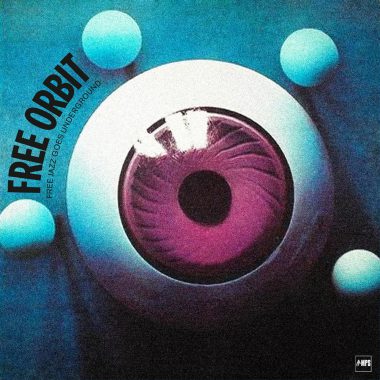