“Elvin is the beat of life itself…When I hear Elvin’s music I hear the future.” So said guitarist Carlos Santana in 2004 when he heard that drummer Elvin Jones had died. The rock star’s comments signal Jones’ importance. Born in Pontiac, Michigan in 1927, Jones’ playing lifted the drum set out of the rhythm section and into the frontline. He could control the pulse of a band while at the same time pepper the music with melodic accents, creating solos that were both strong and sensitive. Jones rose to fame as the drummer of the John Coltrane Quartet and worked witht he likes of Miles Davis, Art Farmer, Gil Evans, Freddie Hubbard, Sonny Rollins and so on.

For his MPS album Remembrance, recordedin February, 1978, he brought along his Elvin Jones Jazz Machine a quintet with the somewhat unusual lineup of two saxophones, guitar, bass, and drums. The band continued to be one of the most popular in jazz on into and through the 1990’s. 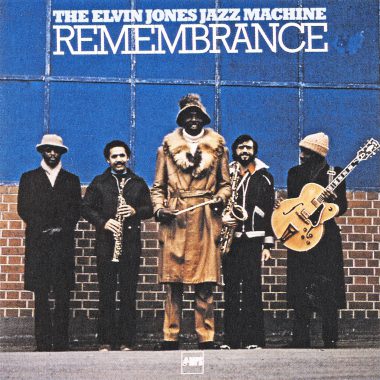