During the Swing Era the clarinet was king. Benny Goodman, Artie Shaw, and Woody Herman led three of the most popular bands of the 30’s and 40’s, yet with the advent of bebop and small-group jazz, the saxophone commandeered the crown, and the clarinet found itself in exile. However, with the advent of the Avant-garde in the 1960’s, a new generation of clarinetists steeped in the tradition, yet yearning to explore the outer limits of the music and their instruments, came to the fore. This live album from the 1979 Baden Baden New Jazz Meeting celebrates six of these adventurers. Perry Robinson is the best-known, having worked and recorded with Archie Shepp, Charlie Hayden, and Dave Brubeck. Texan John Carter grew up with Ornette Coleman, Theo Jörgensmann is a major player on the German jazz scene, and German Bernd Konrad is at home with contemporary classical as well as jazz. Ernst-Ludwig Petrowsky was considered East Germany’s leading jazz musician at that time, while Italian Gianluigi Trovesi plays music ranging from the medieval to the modern. The clarinets are supported by two top rhythm sections, while French violin star Didier Lockwood and Swedish trombone great Eje Thelin add some extra colors to the musical palette. Konrad’s You Better Fly goes supersonic with solos from Konrad on bass clarinet, Jörgensmann, and Lockwood. Trovesi’s Piccolo Processione features the composer on a masterful unaccompanied bass clarinet solo. On Konrad’s Handiwork, the solos begin with Konrad and Trovesi on contra-bass and bass clarinet, respectively, before handing over to Jörgensmann and Robinson. Then Petrowsky duals and duets with East German drumming icon Baby Summer as the other clarinets join in a collective finale. Tale of the Trolls has a mix of folk, Hebrew, and jazz, with composer Perry Robinson the main storyteller. Writer/producer E.J. Berendt designated John Carter’s Scenes From the Black Forest “the most dense and complex piece ever written for clarinets”.  Written for unaccompanied clarinet quartet, the solo order is Carter, Jörgensmann, Konrad and Robinson. All six clarinetists, and both rhythm sections partake in Petrowsky’s Das Ding (The Thing). Petrowsky solos on clarinet and Romanian shepherd flutes, and there’s a drum duo with Baby Summer and Frenchman Aldo Romano. An album that gives the clarinet its due. As Perry Robinson exclaimed, “We never had it so good!” 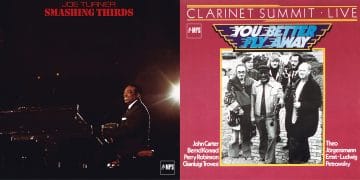 Two very different albums will be re-issued on September 8th:Smashing Thirds by Joe Turner is an album that harkens back to an era when feel-good entertainment was an art form. Turner was acclaimed as ‘the greatest living stride pianist’ at ...

Two very different albums will be re-issued on September 8th:Smashing Thirds by Joe Turner is an album that harkens back to an era when feel-good entertainment was an art form. Turner was acclaimed as ‘the greatest living stride pianist’ at ...