“Light, Airy & Swing”, George Shearing’s 1973 debut album on MPS meant a return to the time of the pianist’s breakthrough as a jazz musician. Featuring bassist Andy Simpkins and Crusaders drummer Stix Hooper, it was the first trio album Shearing had recorded in several years. He had become an international name with his quintet featuring piano, vibraphone, guitar, bass, and drums. The unison lines played by the three melody instruments became known as the “Shearing Sound”. Sometimes referred to as “cocktail music”, his style created a congenial melodic contrast to bebop. However, the eclectic Shearing had also mastered the hectic, sometimes dissonant playing styles of such bebop protagonists as Bud Powell. Shearing was born in London in 1919 and died in New York in 2011. Blind from birth on, he began learning piano at the age of three; after classical training, and a successful early career in England including work with Stéphane Grappelli and Leonard Feather, he immigrated to the USA in 1947. There he played with, among others, Oscar Pettiford, the Montgomery brothers, and Toots Thielemans. Singers Peggy Lee, Ernestine Anderson, and Carmen McRae loved Shearing as accompanist. His international hit Lullaby of Birdland continues to bring in royalties to this day. 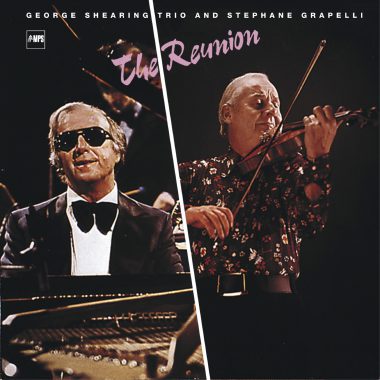