The language is Sami, of course. She originates from a village called Gámehisnjárga (Sami for The border!) a name as fitting and describing for her music as anything. She exists on the border, musically, without crossing it. She’s not one of those “border crossing” artists receiving awards for the effort (even though she has received quite a few very prestigious awards). Instead, the border seems to be the state Mari Boine is in. She seems to live in The Independent State of the Border, which is to say, where Mari Boine is, nobody else are. So, no, she is not Mari Boine, the Sami artist. She is Mari Boine, the artist.

It began at the border, in Gámehisnjárga, in an environment of deep pietistic religious rules, where renouncing music and dance were absolutes. And, of course, rebellion was pending. At first, in the form of Radio Luxembourg (“Doris Day was my first heroine”, says Mari), then through a record by Otis Redding, introduced by her music teacher Einar Eriksen when she was ten. "The little Sami girl was sold!" she exclaims. He went further, trying to convince her father to let her attend school plays and concerts, aiming to make him aware of her talent in the field. "Out of the question!" was his response.

But the devil hasn’t got all the best music. The hymns and the psalms were there, in the chapel. In the back of the room, the ladies congregated, singing and swaying to the music. While some of the congregation thought this behavior unseemly, this was the part of the service that attracted Mari the most (it was actually the only part of the service that attracted her), because it reminded her, on an unconscious level, of something forgotten, something deep, something shamanistic.

There is a political awakening in Sapmi in the 70s. Mari is no part of that. On the contrary, she is ashamed of being Sami, she evens speaks Norwegian to her first child. But there was a guitar hanging on the wall in her parents' home, that she was not allowed to play. So, when she leaves home to start her education to become a teacher, she picks up the guitar. Then she starts reading. Or, she wants to, but the problem is, there is nothing to read. Not a single book about the Sami, about the history of her people!

The rage that builds up inside Mari, and the music coming out of it, is nothing like any artist from Norway has ever demonstrated before or since. Still today, there is nothing as ground breaking and intense ever coming out of the Norwegian music scene.

Mari translates John Lennon’s “Working Class Hero” to Sami. Nothing less will do. The album is called “Jaskatvuođa Maŋŋá (After The Silence)” – and is not referring to the silenced Sami people, but the silence of Mari herself. It´s a thunderous rebellion from a silently voiced, almost meek, Mari Boine, finally finding the tool necessary to express what rages inside her. So there she is: Mari Boine, the artist.

At the same time, she's really getting attention inside Sapmi. She´s commissioned to make music for a theatre play by the newly formed Beaivváš Sámi Našunálateáhter (the National theatre of the Sami people), and is hooked up with a young guitarist, Roger Ludvigsen, who´s background from harder part of the rock scene makes a most strange musical bed companion to the still silently singing Mari Boine. He, from liberal, almost free upbringing, and she, from the strictest of backgrounds. Together - a companionship that would create a totally new direction in music.

It´s 1989, they release the music commissioned for theatre, calls the monster "Gula Gula - Hear the voices of the tribal mothers" (there is, obviously, a feminist message in here) - and is on tour with Norway´s other giant, Jan Garbarek, exposing the world to Mari Boine for the first time.

The world takes notice. Most noticeably, Peter Gabriel, the great champion of "world music" at the time. He obtains the rights to release "Gula Gula" at his Real World label, which at the time is the most important label in the world (the same year, a few months prior, he releases Pakistan´s giant, Nusrat Fateh Ali Khan, and his ground breaking "Musst Musst"). Now the world really takes notice. "Gula Gula" receives Spellemannprisen (Norwegian Grammy) for 1989, and the title track becomes the anthem for Sapmi. Suddenly Mari Boine is Norway´s most famous music export article (after A-ha, that is, but they had already started to fade at the time).

"Gula Gula" makes Mari the icon for the Sami, and she receives the Sami council's honorable prize of 1992. Then, she releases the next album "Goaskinviellja - Eagle brother" (1993) on her own Lean label. Now she runs her own company, makes the music she wants, continues her working relationship with Roger Ludvigsen, and makes her best album so far. Here´s something special. Every time Mari Boine releases an album, it´s better than the last one. And she's always on the move, sometimes in new directions, sometimes deepening the path she started out the last time, but it´s always better. She´s restless, researching new approaches, new attitudes and new technologies.

She follows her own path, but at the same time, Mari Boine is struggling at the end of the century. "Gâvcci Jahkejuogu - Eight seasons" (2002) is a total break. She more or less dismantles her band, and invites Bugge Wesseltoft as producer. A few years earlier, he did "New Conceptions Of Jazz", the most ground breaking jazz album in Norway since Garbarek´s debut back in ´66. His (actually new) concept of jazz is that jazz has its roots in dance music, and he teams up with the emerging (and highly potent) Norwegian techno/house scene for a totally new approach to jazz.

So this is the guy that Mari chooses when she - finally - lets someone other than herself take control. Now she´s finally confident enough to let loose, to let go. She even lets her fellow musicians in on the composing side. And the producer Bugge changes everything you´ve come to expect from Mari Boine. The sound of "Gavcci Jahkejuogu – Eight Seasons” is clearly electronic, so cool it´s almost chic, and, at the same time, it´s unmistakably a Mari Boine record. She also invites in some of the techno/house artists and let them do reworks of her songs. It works wonders too.

In 2003 she receives the highly prestigious Nordic Music Award by the Nordic Council. The money following the price is spent on a traditional long riverboat. "No journalist will ever enter it!" she says. Damned! But she's definitely inside now, an established artist in Norway, a celebrated star.

So, it's time for a change again! On beautiful "Idjagiedas" (2006), she returns to the more organic, earthy sound that was Mari Boine's trademark - it's almost like a consolidation before entering new territories. You could hear the gimbre, the kora and the mbira on "Idjagiedas", and the next move is to go to Africa, to South Africa, no less, and make her best album to date, "Čuovgga Áirras/Sterna Paradisea" (2009), both produced by Svein Schultz. Here, she makes some rather amazing collaboration with South African singers that, with their husky, rough voices, seem to make the perfect contrast to Mari´s pristine clarity. The songs, some of them almost hymns, are among Mari´s best ever. Same year, she is also appointed knight, first class in the Royal Norwegian Order of St. Olav for her artistic diversity.

One can only anticipate what will be happening next, it will surely be even better music coming out of the Boine camp up ahead. But this, this is the story so far. 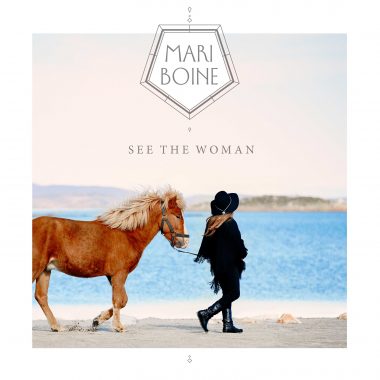 Stay up to date with our newsletter